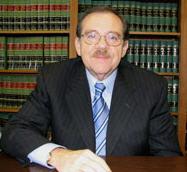 Rubin Guttman is the principal in Rubin Guttman & Associates, L.P.A. Mr. Guttman has been practicing law in Cleveland, Ohio, for over 32 years. He graduated from Cleveland State University School of Law in 1977, where he was both a member of Law Review and a teaching assistant.

Rubin Guttman has also been involved leadership roles in many charitable endeavors, and sits on the Board of seven charitable organizations in the Cleveland area. Mr. Guttman is a frequent public speaker who has appeared on the Merle Pollis and other radio shows. He has also done radio interviews with Gerald Posner and other authors and political personalities.

Mr. Guttman has authored numerous articles and has been the subject of several articles in the Cleveland Plain Dealer. He appeared as a speaker on Ohio medical malpractice before a seminar sponsored by the National Business Institute and has been featured at a seminar focusing on nursing home neglect litigation. In 1999, Mr. Guttman was nominated to be a lifetime member in the "Who's Who In America."

Since 2000, Mr. Guttman has been a member of the "Million Dollar Advocates Forum," an exclusive group of attorneys who have obtained jury verdicts in excess of One Million Dollars.

We're very proud that Rubin Guttman has been nominated an Ohio Super Lawyer each year since 2007 by a poll of Ohio lawyers and Law and Politics, recognizing him as among the top 5% of Ohio lawyers in his field.

Mr. Guttman is a member of the Ohio State Bar Association, American Association for Justice, Ohio Academy of Trial Lawyers and the National Organization of Social Security Claimants Representatives (NOSSCR). He is married and resides with his wife, Eileen, and three children in Beachwood, Ohio.

Honors and Awards
Contact Us
Practice Areas
Client Reviews
★★★★★
Without question, the attorneys at Rubin Guttman & Associates, L.P.A. did an exemplary job in settling my claim with the manufacturer of the prescription medication that led to my bladder cancer. It was clearly a long-shot that unexpectedly came through with a surprisingly large settlement. I would highly recommend this firm to anyone in need of legal services. William H.
★★★★★
I have had occasion to use Rubin Guttman and his firm numerous times over the last 25+ years. In every encounter I have been represented with outstanding professionalism, experience and quality. Rubin and his staff kept me informed of every step that was taken on my behalf. I always felt confident that my best interests were most important. It always helps to hire the best. Richard H. Devaney
★★★★★
I had occasion to use Rubin Guttman's services, in connection with obtaining coverage from a well-known life insurance company, that ended with a completely satisfactory outcome for me. I cannot rave enough about the professionalism and quality of the service which I received from Rubin. They were as good or better as any of the major law firms NITA whom I have had previous experience. Jerry Rothchild
View More
Submit a Law Firm Client Review